In 1938, with the increasing threat of Germany's militancy, the idea was conceived by a Major in the Foreign Office of organising some form of resistance by civilians in the event of invasion. After the outbreak of war explosives and other stores were dumped around Britain but with no co-ordination, hopefully to be used by any persons willing to carry out sabotage behind the German occupation. 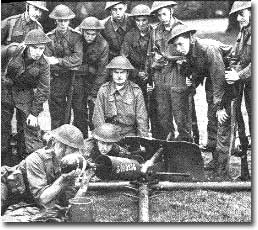 In June 1940 the selection and training of the patrol members began in earnest. Auxiliary Units, the cover name given to the organisation, comprised of two parts.

The first consisted of specially selected civilians with a good knowledge of their local area and physically capable of living rough and fighting and harassing enemy forces. The second part consisted of local wireless networks operated by Royal Corps of Signals personnel with outstations near the coast, each having a civilian operator.

A system of spies and runners would supply information of enemy activity to these operators for relaying to the Signals control stations who would in turn transmit the information to the Area HQs attached to Brigade/Corps of the conventional forces. Each control station had from five to ten outstations, Southern England having a larger number as the more likely area to be invaded.

The Auxiliary Unit HQ and training centre was at Coleshill House, a Palladian mansion, about 10 miles from Swindon, with large parklands and woods very suitable for guerrilla training. Every Thursday evening large numbers of patrol members would arrive, accommodated in the large stable block, to spend the next two days receiving instruction in the use of modern explosives and weapons and unarmed combat during the day, while at night they were transported several miles into the surrounding countryside and required to find their way back in the dark 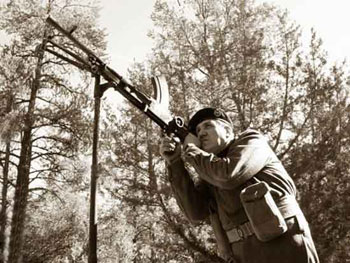 They were the first troops to be issued with stick pencils, a simple mine stuck in the ground and known later by Eighth Army soldiers as 'castrators'. They were also equipped with tyre-bursting mines, phosphorous hand grenades, Piat anti-tank guns, and Thompson sub-machine-guns imported from the United States.

Individual members were issued with a Fairbairn Commando dagger, having received instruction in silent killing, where German sentries could be approached silently and stabbed before they had time to warn others. Pistols and rubber truncheons also formed part of their equipment and they wore thick rubber-soled boots. In some units certain members were issued with a special .22 rifle fitted with a telescopic sight and silencer, capable of firing high-velocity bullets which could kill a man a mile away.

Returning to their local areas, the patrols continued their training several nights a week, although not in the official Home Guard, the patrols were formed into three special Home Guard battalions as a cover - 201 for Scotland, 202 for Northern England, and 203 for Southern England. In some cases it was noticed that these men were not taking part in normal Home Guard exercises and, sworn to secrecy and unable to explain their absence at night, they came under suspicion of being engaged in nefarious or extra-marital activities! The patrols’ area of activity extended from the north of Scotland down the east coast and round to the south of Wales. About 3,500 men were trained at Coleshill and, with a number trained locally, a total of nearly 5,000 well-trained and armed men awaited a possible German invasion.

Auxiliary Units hideouts were supposed to be merely the places to which Resistance men could withdraw to eat, sleep and lie low. Some of the first hideouts appeared to have been built with sieges in mind, with their own early-warning outposts several hundred yards away, connected to them by hidden telephone wires. By the end of 1940 about 300 hideouts were already in use around the country and by the end of 1941 there were 534 operational bases in use. No two were identical, but most were eventually made large enough to house six or seven men in reasonable comfort, although many at first were little more than fox-holes with log roofs, so badly ventilated that candles sputtered from lack of oxygen and the men who tried sleeping in them all night awoke with headaches.

Each hideout was eventually fitted with bunks, cooking stoves, Tilley lamps and other comforts provided by the Army, and each was stocked with food and water-in some cases sufficient to sustain a patrol for as long as a month. Wherever dampness was a problem the tinned foods were frequently replaced so that there was never a chance of besieged Auxiliary Units patrols being finished off by food poisoning.

Most hideouts had plenty of room for the patrols' arms, ammunition and sabotage material, but in some areas subsidiary hides were dug near by to hold these and additional stores of food. Many of the hideouts eventually had chemical lavatories, and a few even had running water and some rudimentary form of drainage.

The hideouts were so well concealed that anyone walking over them would not notice that the ground beneath their feet had been hollowed out, or that it was unusual in any way. And of course the hideouts had to be made impossible to detect from the air.

Undoubtedly the greatest problem was that of digging the hideouts and disposing of the subsoil which they had brought up without anyone noticing-not even the members of neighbouring resistance patrols. Everything possible was done to keep the hideouts inconspicuous the most common trapdoors on the hideouts were simply oak or elm boxes filled with a foot-thick layer of earth. Most of these trapdoors had to be lifted out, and to make this easier, many of them were mounted on steel springs that, when a hidden catch was pushed, raised the tray enough for a man to get his fingers under its rim to open it. Several of the trapdoors were inadvertently discovered during the war; one of them in a wood near Great Leighs, Essex, by a courting couple. They suddenly felt the ground begin to move beneath them. When they found out why, in some alarm they notified the police who in turn notified the Army, and that hideout was no longer used.

At the end of the war Royal Engineer demolition teams were sent around the country to destroy all the Auxiliary Units operational bases to keep them from becoming the hideouts of criminals on the run of play places where small children might easily get hurt. However, a number of the hideouts were not destroyed and, although most of them have by now caved in, leaving only rain-washed dents in the ground to mark their positions, a few still survive, mostly on private land where they are unlikely to become a nuisance.